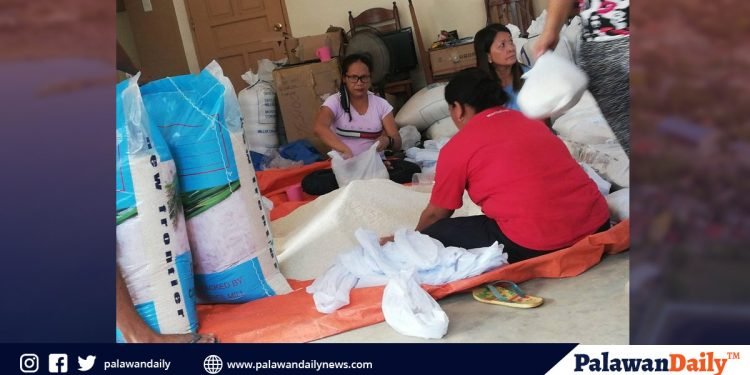 The outdated list of 2018 Census from the City Planning Office, according to barangay officials have intruded in the delay of relief goods distribution and cash assistance for the residents of San Manuel, this city, who are still reeling from the enhanced community quarantine (ECQ) amidst the Covid19 pandemic.

Social media netizens and residents of the said barangay displayed distress on social media concerning the delay of distribution of relief packs and cash assistance from the City Government which will also be given through the help of barangay officials and purok staff. A source told Palawan Daily News that they were being asked by some barangay staff to choose whether they would like to receive a relief pack or the P1500 cash assistance.

A San Manuel resident, meanwhile, said that they haven’t received any relief goods or cash assistance since the distribution started last week.

Both sources asked not to be identified for fear of reprisals from local officials.

Roselyn Delgado, San Manuel Barangay Treasurer, in an interview said that the first set of distribution already started since last week, through door to door delivery which is still on-going as of press time.

Delgado also said that the cash assistance from the City Government amounting to P1500, is now on its 90% completion, although it is still on-going up to now for some purok.

Delgado also said that due to the outdated 2018 Census from the City Planning Office, they experienced a hard time on deliberating the recipients, adding to that, are the new settlers and residents who haven’t been listed yet.

The 2018 Census conducted by the City Planning Office, according to Delgado, served as the initial bases for the benefactors though a house to house enlistment has been launched, as well, in benefit of new residents and boarders within their jurisdiction.

According to Delgado, a total of 3,571 households were listed on the 2018 Census from the City Planning Office, a number which they estimated now to be doubled due to unlisted residents and boarders who resides in some numerous apartments, bed spaces and boarding houses within the barangay.

A total quick response calamity fund amounting to P624,000 was initially allocated for relief goods such as rice, canned goods and noodles which was distributed to some residents last week, while another fund amounting to P507,000 is now being used to purchase thousand sacks of rice for the second batch of distribution.

When asked if the latter amount would suffice to accommodate the remaining recipients, Delgado said that they fear it would not, also be stating that they have not yet come up with any plans on how they would handle the situation in case the enhanced community lockdown will extend.”

As of press time, Palawan Daily News is waiting for an official statement from the City Planning Office.

Palawan Daily News also asked if the local officials have started to give out any social amelioration cards needed for the distribution of P5,000- P8,000 Covid19 cash assistance to vulnerable sectors of society such as persons with disabilities, senior citizens, pregnant mothers, solo parents, homeless persons and workers in informal sectors from the Department of Social Welfare and Development (DSWD).

DSWD will be giving out the cards to local government units (LGUs), which in turn will distribute them to the barangay levels for dissemination in order to aid vulnerable members of the barangay.

Though they’ve been aware, Delgado said that the barangay hasn’t receive any cards yet from DSWD also admitting that their office has been frequently visited by members of the informal sector asking about the financial assistance.

Delgado said that they will announce once they received any instruction from DSWD. She added that they have been working to ensure that every household will receive their relief goods and cash assistance.

Meanwhile, DSWD MIMAROPA spokeperson Chatty Decena on a phone interview Thursday with Palawan Dalily News said that a meeting has been conducted with other officials from both the DSWD national office and region regarding some amendments on the guidelines on applying for the cash aid.