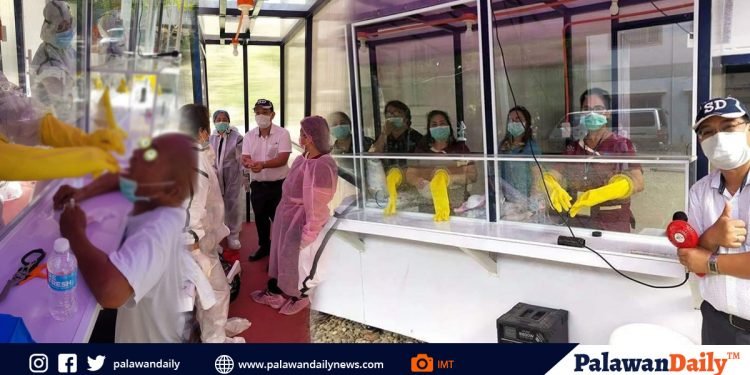 The City Health Office (CHO) has conducted a dry run of the expanded mass testing for COVID-19 on Thursday, May 7.

“The dry run was done so we could see actual flow from extraction of the candidate for testing, until such time magawa ang procedure at matapos ito. This way we could estimate the time na magu-gugol namin sa test and ma-estimate din [kung] gaano kadami ang makakayang i-test in a day,” said Atencio.

“Another thing is for us to see saan kami magkakaroon ng lapses, whether it is a flaw in infection control protocol or in doing the procedure itself,” she added.

Atencio also said they even performed this medical simulation through fetching from a certain location in the city their two volunteers who role-played as candidates for expanded mass testing, transported them to the specimen collection site, and after the procedure brought them back again to where they were initially situated.

Atencio said this procedure, which is an initiative of the city government, is going to be spearheaded by Dr. Mark Buenaventura.

She said the team will be assisted by the Puerto Princesa City Police Office (PPCPO), City Epidemiology Surveillance Unit (CESU), and other concerned departments.

She added the CESU will be the one to forward to CHO the list of eligible candidates for testing, while the medical technologists of CHO will conduct the specimen collection under direct supervision of a pathologist, Dr. Frederick Dalingding.

“[This is] to ensure proper infection control protocol and protection of our medical technicians and surveillance team to monitor our candidates. Sa una susunduin pa din ang mga eligible candidates going to the facility, then the testing procedure na, then ihahatid sila pabalik. Depende sa result ng management after,” she said.

Atencio further reiterated it will be the Research Institute for Tropical Medicine (RITM) or the subnational laboratory in San Lazaro Hospital (SLH) that will run the test.

“I just want to clear that we don’t and we are not going to run the test. We will only collect specimens and will send it outside Palawan going to RITM or San Lazaro Hospital,” said Atencio.

In a news article of the Philippine News Agency (PNA) about the guidelines on expanded testing for COVID-19, it noted that Cabinet Secretary and IATF Spokesperson Karlo Nograles listed the subgroups of at-risk individuals in need of testing.

Nograles listed four subgroups, from A to D, people arranged and grouped from greatest to least in need for testing. Subgroup A comprises prioritized patients or health workers with severe symptoms, and have travel history or contact with a confirmed COVID-19 case.

Subgroup B on the other hand consists of “considered vulnerable” patients or health workers with mild symptoms, yet the same with subgroup A, have travel history or contact with a confirmed COVID-19 case.

This is followed by Subgroup C: patients or health workers with mild symptoms, and have a travel history or contact with a confirmed COVID-19 case.

Under Subgroup D are those asymptomatic patients or health workers but have history of travel or contact to a confirmed COVID-19 case.

“This isn’t mass testing; I guess some people misinterpret it as ‘mass testing for all’. This is expanded mass testing because dati severe COVID-related cases lang ang nate-test [or those] previously PUI, moderate to severe. Ngayon they expanded the criteria to also include those without symptoms, but has pertinent history of travel and exposure. We are going to be the one to identify them, our contact tracing team, CESU and city health officers,” Atencio said.