SHHHHHHH! Palaweños, there’s an impostor ‘Among Us’

Your fingertip is dancing up and down as if it is the conductor’s stick leading the orchestra to play the symphony of sorrow as you scroll tirelessly on your newsfeed watching, reading, and just being completely overwhelmed by the sheer negativity of the news every day – COVID, COVID, COVID and COVID.

A soft bell sound caught your attention, a pop-up notification appeared – it’s your barkada group chat and it displays just 6 random scribbled letters. HDAPYQ, it says. You know what these letters mean: pack up your space gear and heighten your senses; there are no true friends up there – there’s an impostor among us.

Innersloth’s sci-fi mystery social deduction game ‘Among Us’ got its share of the limelight from this summer to the recent months of 2020 as the two-year-old game gained fame around the globe after influencers and public figures streamed the game on different platforms like Facebook, YouTube, and Twitch. The increasing players around the world enjoy the game with its cross-platform capabilities – the game is available for Android, IOS, and Windows users.

Graphs posted by the game developers of the online game showed an exponential growth in the number of players in all available platforms these past months. Last September, the number of Daily Active Users (DAU) climbed up around the 60 million mark.

Unsurprisingly, Filipinos definitely caught wind of the rumors, and the word spread around the country like wildfire as people are currently desperately looking for a means to interact and have fun with friends safely amidst the pandemic. Meanwhile, Palaweños were not spared from the grasp of this virtual tambayan/ playground inspired by the social deduction game ‘Mafia’ as the province was also hit by restrictions, causing physical hangout places to temporarily halt their operations.

Players can choose from playing in a public server, where they can play with different people from different places or countries, or they can choose to create a private game exclusive only for friends. This feature helped a lot in its success since most of its players are teens or young adults who have their own circle of friends to play with.

Among Us takes the players aboard a space mission en route back to civilization. The crew of the ship is working to do tasks to fix and hold the place together. However, among them are alien shapeshifters who replaced some of the crew to sabotage the ship and kill the entire crew. The game offers players three maps to choose from: the spaceship ‘The Skeld’, the earth base ‘MIRA HQ’, and the alien planet research base ‘Polus’.

The game can support up to ten players, and they are individually given a role before the game starts – Crewmate or The Impostor. Depending on the number of players and the game settings, up to three Impostors can infiltrate the team of crewmates. The thrill is, nobody knows who the impostors are, so the crewmates always have to keep an eye out for the murderous alien shapeshifters. If a corpse is found, players can ‘Report’ it to initiate a meeting where the crewmates and impostors alike play the blame game and start a virtual discussion on who are suspicious. Unlucky ones will be voted out of the ship – a sure death penalty, guilty or not.

Proving your innocence is another fun and tricky part of this game. Commonly, players transform into some sort of modern-day Sherlock Holmes, although they usually end up being targeted by impostors or end up flying lifeless in space if they weren’t able to prove the speculations wrong. On the other hand, good impostors are almost all of the time good in the art of tactics, lying and deception – it’s a deception game after all.

“My favorite part is when someone calls an emergency meeting to discuss and vote for the impostor, especially when I’m the impostor, because it will enhance my reasoning skill and tactics on how I will play like a true impostor,” said Andru Joshua V. Lolo, also a Palaweño college student and Among Us player.

COVID-19 is the Impostor

The current situation with the pandemic is strikingly similar to the circumstances inside the game. People are currently trying to be the ‘crewmates’ who work together to find a cure, minimize the patients and make things better amidst the pandemic. On the other hand, the COVID-19 virus is certainly the ‘impostor’ among us, killing people as it plagues the world. Just like in the game where the players are deducing who the impostors are, people, especially the frontliners, are trying to find who were infected and who are the possible new carriers of the virus.

“It’s quite funny how similar this game is to what we are currently experiencing right now. Just like what we do in the game, may we also have the same action amidst the global pandemic, completing our mission and move forward as one,” said Ryan Jay S. Padul, another Palaweño college student and Among Us player.

The global efforts against the pandemic share the same mission as the crewmates in the game – to find and eject the impostor COVID-19 and to do the needed tasks to make the world healthy again.

The developers of the game announced earlier this year their plans to develop the sequel of the game “Among Us 2.” However, due to the sheer number of support and players in the original Among Us game, the plan was shelved. According to the developers, the content planned for the sequel will be added to the original game, like additional players, better servers, colorblind support, an account system, and a new location. 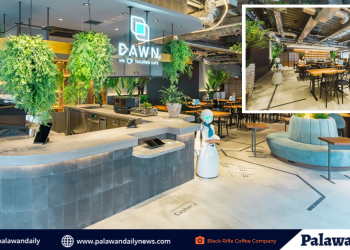